For those who knew Xander's father, many have described him as being an near-splitting image of him due to having inherited many of the mans looks though he has some features belonging to his mother. He is rather tall one as he stands at 6'2" and weighs. His face is described by Jessica as being handsome and clean-shaven accompanied with somewhat rugged yet warm features belonging to a young man with a strong and confident voice though has compared his looks to that of a delinquent. He inherited his eyes from his mother as they are an intense chocolate brown with noticeable gold flecks. Xander has jet black hair that is typically kept short but spiked up at the topwhen wet, however, it is pushed down with his hair plastered to just above the middle of his forehead. His build is solid with a lean but muscular and well-toned body combined with broad shoulders due to vigorous training he has done. commented that he sometimes bore himself with great dignity that, combined with his build, gave him an intense, commanding air that many find difficult to ignore. His russet skin is smooth that is described as being "great" due to never suffering from zits or blemishes which he inherited from his mother but is marked by a cross-shaped scar on the lower part of his abdomen while an horizontal, jagged scar marks his left side. It is noted that his handsome looks and muscular body makes him popular with the girls along with a smile that described as being "charming and warm" though he often appears intimidating which makes it difficult for those around to approach or talk to him. Jessica described him as having pleasantly strong earthly scent.

Add a photo to this gallery

Xander's clothing style usually favors mature, dark clothing; black shirts, t-shirts, darkened jeans, motorcycle/combat boots and leather jackets though much of it was practical and allowed him to move around without much restriction. This style is similar to that of other Dauntless. However, he also favors other darker colors such as grey, dark blue and burgundy though he will sometimes wear lighter colors as well as dress in a more casual and comfortable yet trendy sense. During training, Xander wears clothes more suited for it. 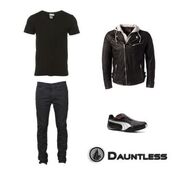 Add a photo to this gallery

To many people, Xander comes off as being a serious, sardonic and somewhat antisocial person in that he acts as a lone wolf- often choosing to isolate himself from others due to preferring to be in his own company to that of being in others, something that has both caused him to become an independent mage and given him the impression of being haughty which has caused several others to dislike him. This preference to be by himself isn't something he does out of thinking he is better than everyone else but rather stemming from the fact that he often has difficulty with properly interacting with others. However, this has lessened to an certain degree after meeting Jessica as he is more willing to interact with others. He is also very rebellious especially towards authority in that he doesn't like to be ordered around and refuses to let anyone push him around. This is especially true towards authority figures as he has little respect for them and only shows it to those who have managed to earn his trust. He often shows an honorable side in that he refuses to resort to cheating, fighting dirty, using cheap tricks or tactics in order to gain an upper hand in battle due to finding it ¨dishonorable" and dislikes those who uses them. This also causes him to refuse to attack opponents from behind nor will he fight those who are weaker than him. This is shown when he refused to fight when the latter was injured. In spite of him mostly showing , he is actually rather emotional though this mostly revolved around those he has managed to form a relationship with as his demeanor is quick to become cold and dangerous if they are threatened or insulted.

Retrieved from "https://divergent-fanon.fandom.com/wiki/Xander_Morrison?oldid=5085"
Community content is available under CC-BY-SA unless otherwise noted.